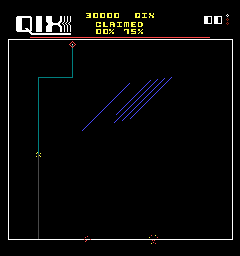 The objective of Qix is to claim a certain proportion of the playing field as your own. At the start of each level, the playing field is just a large, empty rectangle, containing the Qix - a stick-like entity that performs peculiar, erratic motions within the confines of the rectangle. The player controls a small marker that can move around the edges of the rectangle. To claim an area of the screen, the player must detach from an edge and draw Stix within the rectangle. Stix are simply lines traced out by moving the marker. When the marker traces out a closed shape, the area enclosed by the shape becomes solid and has been claimed. The player may draw either Fast Stix, which appear blue when solid, or Slow Stix, which appear red. Slow Stix take longer to draw, but are worth twice as many points. Once the player has claimed an area, the marker can safely move along the border of that claimed area. To complete a level, the player must claim 75% or more of the rectangle's area.