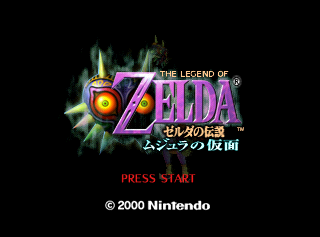 Three days, 24 masks and only one hero. Help Link save Termina in his most mind-bending adventure ever!

In Link's latest crusade, the Hyrulian Hero struggles against time to unravel the unsettling mystery of Majora's Mask. This mind-bending follow-up to Ocarina of Time sparkles with an artistic flare and presents a premise which shatters the foundation upon which most games are built. Perpetually reliving the same three days and three nights, Link is able to explore his world and relate to other characters like never before. As you struggle to stay afloat against crashing waves of déjà vu, you can't help but smile as the sheer depth of the game's puzzles becomes clear.

Plot is often an afterthought in video games, but it is the driving force in Majora's Mask. The storyline meanders through the game like a living creature, poking around here and there to reveal greater insight into the land of Termina. Link is a well-armed detective in this mysterious adventure, gaining greater insight into the lives of established characters and meeting fresh faces as well.

At first glance Majora's Mask appears to be uncharacteristically dark and brooding, but in fact it is usually the fear of the unknown which creates this uneasy mood. As Link gains knowledge, the world becomes less intimidating.

The mystery begins a mere three months after Link's triumph over Ganondorf in Ocarina of Time. Now downtrodden, Link guides Epona through a somber fog in search of his faithful fair friend Navi. To Epona's surprise, two mischievous fairies materialize out of the mist and send Link's steed into a panicked retreat.

These two fairies turn out to be siblings, appropriately named Tatl and Tael. As Link falls to the ground and loses consciousness, a disguised Skull Kid emerges from the fog. Both merry and macabre, the masked marauder steals Link's Ocarina and immediately mounts Epona.

Link gives chase of course, completely unaware that he is pursuing not a mere Skull Kid, but one possessed by the mystical power of Majora's Mask. At the conclusion of their flight, Link unwittingly follows the Skull Kid through a powerful portal which leads to parallel universe.

This new land is called Termina, and although it contains many of the same features and inhabitants as Hyrule, it is a unique world which is only familiar to Link in an unsettling sort of way. It doesn't take Link long to learn that he has arrived in Termina at the most inopportune of times. Not only is there a Skull Kid on the loose driven by the dark power of Majora's Mask, but the very moon itself will bully its way through the atmosphere and devastate the land in a mere three days.

Link knows that this is no mere coincidence. Before dawn on the fourth day, Link must somehow solve the mystery of Majora's Mask and save Termina from the lunatic mission of its own moon.

The moment Link enters the twisted land of Termina, the game's internal clock begins to tick. Link has a scant three days and nights to solve the mystery of Majora's Mask and halt the descending moon, so every second counts.

The internal clock does not run in real time. One Terminian day is roughly equivalent to 20 minutes of gameplay. The entire three-day cycle, then, can be completed in one hour. Sounds like a pretty short game, right? Wrong.

The soul of Majora's Mask and the thing which makes it such a wonderful game to experience is that throughout the game Link relives the same three days over and over again. Anyone familiar with the movie Groundhog Day will immediately recognize the potential of this premise.

Link's major accomplishments remain intact from one three-day cycle to the next, but his encounters with other characters and certain day-to-day activities are completely wiped clean when a new cycle begins. Because of this, you have to plan your activities wisely to ensure that you're able to accomplish at least one major goal before the end of the cycle.

This format is obviously rooted in fantasy, but surprisingly it makes the game seem incredibly realistic. Since Link is able to relive each day as many times as he desires, over time he acquires the ability to actually experience every moment of every day at each and every map location. Instead of just observing a particular character at a specific moment on a certain day, for example, Link can eventually discover what occurs in that character's life - both night and day - for an entire three-day period. You can begin to get a feel for the depth of Majora's Mask when you consider that Termina is home to dozens of characters which are brought to life in this manner.

How does Link gain the privilege of eternal life? At the stroke of midnight on the eve of the fourth day, a special door opens in center of Clock Town which warps Link to where he began
his adventure. If he doesn't make it to the door in time, the kamikaze moon succeeds in its suicidal plan to destroy the world.

After playing through a few of these three-day cycles, the magnitude of this project hits home and you can't help but appreciate the vision and execution of Shigeru Miyamoto, Eiji Aonuma, Takashi Tezuka and the entire development team.

Masks play a vital role in Link's Terminian. Early in his quest, Link encounters a traveling salesman from the Happy Mask Shop. It's not immediately clear whether this shady character is
aligned with the forces of good or evil, but he claims to be the rightful owner of Majora's Mask.

It is this traveling salesman who places a three-day time limit on Link's exploits, coincidentally coinciding with the inflexible schedule of the falling moon. The nomadic representative of the Happy Mask Shop gives Link his first mask, the Deku Mask. This is just the first of 24 masks which Link will find during the most dangerous masquerade to ever take place.

When Link dons the Deku Mask, he undergoes a painful transformation and takes the form of a Deku Scrub. While wearing this mask, Link is able to do business with Deku Scrubs who would
normally ignore him in human form. Link gains special abilities while wearing the Deku Mask. He can shoot bubbles from his snout in typical Deku fashion, and float through the air via flower propeller power. Instead of the Ocarina, Deku Link blows an impressive multi-horned instrument to blast out a medley of magical tunes.

When Link wears the Goron Mask, he inhabits the body of a fallen Goron named Darmani. With bushy white sideburns and a rotund belly, Goron Link is one of the most unusual Gorons you'll ever see. While disguised as the rock-munching Darmani, Link is equipped with a powerful punch and the ability to roll up into a speeding spiked wheel. At the Goron race track, Goron Link speeds through the course at a pace that would put any Pod Racer to shame. Goron Link favors the bongos over the Ocarina, and he has to pound out mystical rhythms to accomplish certain tasks.

When Link picks up the Zora Mask and transforms into a Zora, he instantly gains the ability to speed through the water like an over-caffeineated dolphin. He uses detachable arm fins to unleash a devastating double boomerang attack, and is able to stay underwater for as long as he'd like. Most impressive is Zora Link's musical instrument: a radical fishbone guitar which he plays in a hip Zoran band called the Indigo-Go's.

Obviously, many of the puzzles in Majora's Mask require Link to use the primary transformation masks listed above. There are over 20 additional masks, though, which can help him other ways. Some masks allow Link to talk with specific characters, while others give Link special powers like the ability to run more quickly. At times, the possibilities seem endless.