Kaze no Takuto proves exactly why Link is Legendary.

Since the debut of Zelda no Densetsu in 1986, all of Link's games have been the stuff of legend--universally appealing adventures that emerged as beloved triumphs of gameplay, presentation, innovation, graphics and fun. In the ninth entry in the series, Link debuts on GCN with a fun new cel-shaded look, but the game stays true to the glorious heritage of the series. The classic mix of sword-swinging action, perplexing puzzles and stirring story lines remains intact, but the stunning cel-shaded graphics give the people and places of Link's watery world a wildly artistic new look. And for the very first time, Link sails freely on the high seas!

Features:
* Explore a vast sea as you travel from island to island riding in Link's mystical sailboat, the King of Red Lions.
* Control the wind, manipulate time and move objects using Link's Wind Waker wand.
* Slash vile enemies and pass elaborate puzzles in evil-infested dungeons.
* Face off against innovative and intimidating bosses in cinematic showdowns.
* Explore every corner of the sea to find valuable items, interesting characters and challenging mini-dungeons.
* Connect a Game Boy Advance to the GCN to team up with a friend for two-player cooperative play (starring Tingle)!

Legend has it that whenever evil has appeared, a hero named Link has risen to defeat it. In Zelda no Densetsu: Kaze no Takuto, that legend continues on the surface of a great and mysterious sea as Link sets off on his most epic and scenic adventure yet. Aided by a magical conductor's baton called Kaze no Takuto, he will face unimaginable monsters, explore puzzling dungeons, and meet a cast of unforgettable characters as he searches for his kidnapped sister, Aryll.

Link must travel across a sprawling ocean known as the Great Sea. As he sails from one island to the next on a magnificent boat that calls itself the King of Red Lions, wind plays a key role. For Link to visit a particular location, the wind has to be blowing in the proper direction. Even if the wind is cooperating, Link must pay careful attention to his Sea Chart and compass as he sails. When he first sets sail on the Great Sea, most locations are so far away that they aren't even visible! What if Link needs to reach an island to the west and the wind is blowing to the east? That's when Kaze no Takuto comes in handy. Using Kaze no Takuto, Link can conduct a magical song which allows him to control the direction of the wind.

Link has a whole new array of weapons and items to help him fulfill his fate. The Grappling Hook allows Link to freely swing over large gaps, and the Spy Glass gives him a close-up view of distant objects. Some items, like the Bomb, have dual functions. If Link uses the Bomb while he's on the King of Red Lions, it will turn into a powerful cannon. The Grappling Hook transforms into a treasure-trolling crane while Link is on the boat.

When a new Zelda game is released, gamers expect a masterpiece--Kaze no Takuto still manages to meet and exceed their expectations. Particularly, the cel-shaded graphics add a captivating animated feel to Link and the world around him. Whether you've been playing Zelda games since the '80s or you're about to embark on your first Zelda quest, Kaze no Takuto's adventurous spirit will capture your heart and mind. 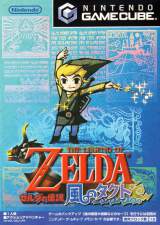