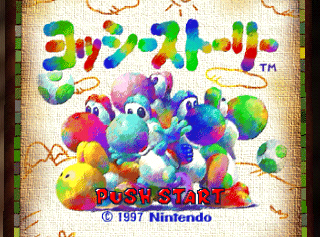 From the brilliant mind of Super Mario 64 creator Shigeru Miyamoto comes a gorgeous game with a guaranteed storybook ending. Follow the adventures of six Yoshis as they search through sunny woods, dark caves, soaring mountains, steaming jungles, vast oceans and gloomy castles for the Super Happy Tree, which has been stolen by the dreaded Baby Bowser.

Loosely based on the Super NES classic Yoshi's Island, Yoshi's Story fully exploits the strengths of the world's most powerful game system. Yoshi can walk, run, swim, leap, flutter and fire his payload of eggs with unerring precision. The action takes place in storybook "pages" made up of bookmaking materials and other familiar textures, including cut-paper forests, denim clouds, inflatable plastic islands and stacks of colored spools.

Yoshi's Story pioneers use of the Rumble Pak as a key element of the game-play experience, as you'll be able to feel invisible but treacherous currents when Yoshi swims through oceanic depths. Yoshi's Story features the precise and responsive control players have come to expect from a Miyamoto game. With a light touch of the Control Stick you can float on a leaf, ride a friendly dragon and tiptoe past a swarm of angry bees!