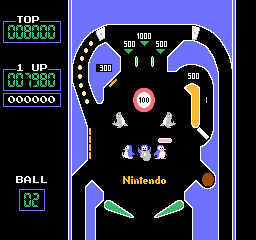 Pinball has some many bonnus and also had a secondary Breakout like mode, which the player reaches by hitting the ball into a bonus hole that takes the player to a bonus stage where they control Mario carrying a platform. The object of this mode is to rescue Pauline. The player achieves this by bouncing the ball on the Mario's platform and hitting various targets, the destruction of which also earns them points. When the blocks under her are all gone, she will drop. you must catching her on Mario's platform to earns bonus points, but you must release pauline it in one of the side platforms and not let it fall, while holding the ball bounce to continue to earn points until the ball falls and go to start.

Cameo in WarioWare - Twisted! (2005, Nintendo GBA) : One of 9-volt's games is based on the Arcade Pinball's bonus game.