Vampire - The Night Warriors [Green Board] 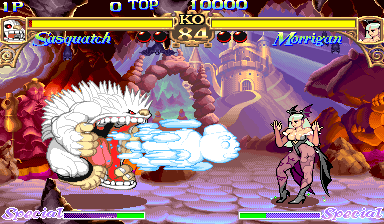 Vampire - The Night Warriors is a one-on-one beat-em-up in which a powerful alien demon called 'Pyron' has invaded Earth to add to his collection of the planets that he has already devoured. Enter the world's most fearsome monsters who, ironically, are Mankind's last line of defense.

The game featured a 'Special' meter similar to the 'Super Combo' gauge from "Super Street Fighter II Turbo", in which players could fill the gauge to perform either a unique combo-type move or a powered-up version of one of their specials (called "EX", and a concept which would appear in later Night Warriors games as well as "Street Fighter III").

Unlike the 'Super Combo' gauge', the Special in Night Warriors gradually depletes unless players performs their super move. This prevents players from preserving their super moves for later use.