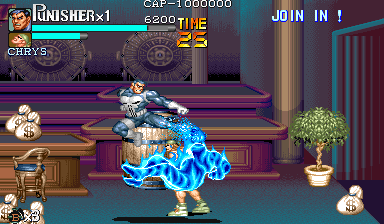 The Punisher is a side-scrolling beat-em-up based on the Marvel Comics character of the same name, in which one or two players take on the role of either 'The Punisher' or 'Nick Fury' and must battle through six dangerous locales filled with violent criminal gangs, leading to a final confrontation with criminal mastermind, 'The Kingpin'.

As well as the standard punch and kick moves, each character also has a special attack. This move is powerful enough to fell several enemies at once, with the trade-off that each time a special attack is executed, some of the player's energy is lost. Energy levels can be replenished by finding food that lies hidden in some of the background objects that litter the levels.

Many enemies carry weapons, such as axes, baseball bats, swords and knives and should players manage to knock these from the enemies' hands, the heroes can pick up the weapons and use them against the enemies. In keeping with their comic book counterparts, each player character also carries a handgun; this only comes into play when confronted with gun-wielding enemies, at which point the players' guns are drawn automatically. Once the gun-carrying enemies have been killed, the players' guns are automatically re-holstered.

A large and powerful gang boss awaits the heroes at the end of each stage. The five gang bosses are Scully, Guardroid, Bonebreaker, Bushwacker and Guardroid 2. The sixth and final level takes place in The Kingpin's lair, ending with a showdown with the criminal mastermind himself.