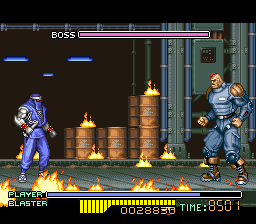 The Ninja Warriors Again is a side-scrolling fighting game published by Taito and developed by Natsume. The tyrant Banglar has become a ruler and uses his army and oppressive regime to control the country's population. An obscure underground opposition group still remains and three ninja-androids are built to assassinate the merciless dictator. The player controls one of three cyborgs - Ninja is a large and heavy fighter with powerful fists and metallic nunchakus, Kunoichi is a female Ninja and the most balanced character of the lot and finally, Kamaitachi is a fast and frenetic fighter with expendable blades in its forearms. Our heroes can jump, grab enemies, pick up bikes and large metal containers and throw them in the air with ease. A power meter located at the bottom of the screen slowly fills up and a powerful explosion-attack can be unleashed when maxed out - the gauge however drains down each time the Ninjas get hit. Blaster combinations can also be triggered when the power meter is completely full and each robot has his own set of specific moves - for instance Ninja can use his jet boost to propel himself through the air and Kunoichi can trigger spectacular overhead attacks. The game is vast and features eight long stages.