Super Metroid is an action game and it is the third Metroid game to be released by Nintendo. In the last episodes, the bounty hunter Samus Aran defeated Mother Brain and handed the last Metroid alien alive, still a larva, to a Galactic Research Station to study and harness its energy-absorbing capabilities. Super Metroid starts on board the Ceres station, where things begin to go wrong. As it turns out, all the scientists there are dead and Ridor? (aka Ridley), Samus's arch-enemy, flies off and takes the metroid infant away. Samus must now return to Planet Zebes, the original alien world, and retrieve the creature. The blond bounty hunter and her thick body armor are back in this huge game - Zebes is a gigantic place and the game's central hub, with innumerable hidden rooms and many secrets. Samus comes equipped with a simple power-beam but, in the Metroid tradition, she can collect more weapons and abilities along the way such as missiles, charge beam, grappling hook, speed booster and the almighty morph ball. Samus's suit, boots and power-beam can be independently powered up as well. The alien world on Zebes is vast and made up of six huge areas. A map is available to help Samus find her way around the planet - it is however far from complete and only areas she has explored appear in pink, until she steps into one of the numerous map stations which give her the current area's map data. Color coded doors connect most of Zebes's rooms and corridors - although most of them can be opened with the power-beam, others require different weapons such as the missiles, the bombs and so forth. Super Metroid features three save slots and an english mode is directly available from the option menu. 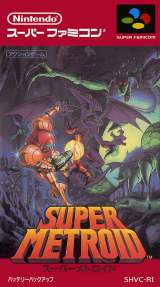