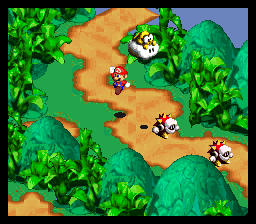 Mario stars in his first RPG in this highly acclaimed role-playing adventure. Excellent 3-D graphics and a rich variety of game play will enthrall Mario and RPG fans alike!

In Super Mario RPG, Mario's beloved Mushroom Kingdom has been thrown into chaos by the appearance of an extraterrestrial villain. This evil and outer space menace, Smithy, brings fear and treachery to the once-pleasant Mushroom Kingdom. Once Smithy crashes into the Star Road, he causes seven stars to be scattered throughout the land.

Mario and his friends must recover the Seven Stars and repair the Star Road by making an epic journey to Bowser's castle to confront the dreaded Smithy. Princess Toadstool, Mallow, Geno, and -- believe it or not! -- Bowser help Mario restore tranquility and happiness to the Mushroom Kingdom.

There are seven stages and 29 areas to navigate in Super Mario RPG. Integrating a traditional menu-driven RPG with action and puzzles, this pak offers a medley of playing excitement. The stunning graphics include fully rendered characters and gorgeous landscapes. For fans of Mario and role-playing games alike, Super Mario RPG shouldn't be missed.