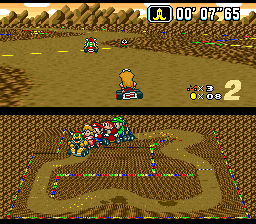 This is the third best-selling Super Famicom game of all time with eight million copies sold.

You can shrink your driver and kart by holding button Y and pressing A at the Driver Select screen of Grand Prix and Match Race modes.

Earn the Gold Cup in the Kinoko, Flower, Star, and Special cup of the 100cc to unlock 150cc difficulty.

In the Time Trial Driver Select screen, press Start on controller 2. Now you can select any character to race against as a ghost on any course.