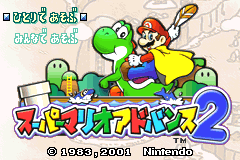 One of Mario's most massive adventures comes to Game Boy Advance!

When Super Mario World was released in 1991, it turned the action/platform genre on its head. The game's incredible depth and unrivaled creativity made it an instant success, and even today it stands up to the test of time. Ten years later, other game designers are still striving to create a platform game as intense and challenging as Super Mario World. It's hard to believe that the entire adventure has been wrapped up in a portable package, but it's true. From graphics to gameplay, Super Mario Advance 2 recreates the classic SMW experience perfectly. The development team even used a special color palette designed to make this one of the brightest, most vibrant GBA game to date.

While planning the perfect vacation on Dinosaur Island, things go awry for Mario and Luigi when they learn that Princess Peach has once again been kidnapped by the ever-diabolical Bowser. Being chivalrous plumbers, Mario and Luigi set out on a massive adventure to rescue their long-time friend. To reach their goal, they'll have to crush Bowser's evil Koopalings and solve some of the most challenging puzzles they've ever faced.

Players can choose to play as either Mario or Luigi before entering a level. Mario is more speedy than his brother, and Luigi can float in the air longer than his pudgy sibling (a new feature in the Super Mario Advance version). By collecting power-ups, both brothers can take advantage of awesome special abilities. A Mushroom makes Mario grow, a Fire Flower allows him to shoot fireballs, and a feather equips Mario with a Cape. The Cape can be used to eliminate enemies, or it can also enable Mario to fly briefly if he has enough space to get a running start.

Other moves include a block-breaking Spin Jump and the ability to carry items like Shells and P-Switches. P-Switches turn blocks into coins and vice versa, which provides plenty of fodder for fun, perplexing puzzles. Another great gameplay feature is the ability to ride Yoshi. In fact, Yoshi's very first video game appearance was in Super Mario World. When riding Yoshi, Mario or Luigi can make their dino pal slurp up enemies, regurgitate fireballs and carry special items.

Like any Mario game, Super Mario World is crawling with secrets. In addition to hidden blocks and vines within the levels, many levels feature hidden exits which take a lot of exploration to discover. Finding these hidden exits is the only way to explore all 74 levels in the game. You can tell which levels have secret exits by looking on the overworld map. If the level is represented by a red dot instead of a yellow dot, you'll want to explore that level extra carefully.

It's an amazing accomplishment to fit such a massive game into a portable package, but Super Mario Advance 2 is more than just an updated version of Super Mario World. The development team has also included the classic Mario Bros. arcade game, which can be played by one to four players. Using Game Boy Advance Game Link Cables to link up, four players can challenge each other using only one Game Pak! Of course, each player will need his or her own Game Boy Advance.