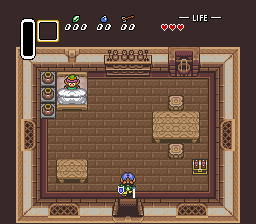 After the initial success of Zelda for the Famicom system, a sequel was inevitable. Kamigami no Tri-Force is the third opus in the Zelda series, one of Nintendo's most popular and flagship franchise that became a genre of its own. During a stormy night, the young Link is awaken by a warm female voice. Agahnim the dark priest has captured princess Zelda and holds her captive in the nearby castle. She now telepathically pleads Link for help and, without hesitation, he grabs a lamp and follows his heart. But rescuing the princess is only the beginning of a long journey for our young hero. The land of Hyrule is at stake and he is not yet aware of the many dangers lurking out there - he will retrieve the Master Sword, travel to the Dark World, reunite the Tri Force and fight Ganon, his archetypal enemy who, once again, has returned to conquer the Light World. The game features the overhead perspective introduced by the first episode of the series. Link is equipped with a sword and a small shield that can deflect enemy attacks and projectiles. The sword can also be used in several different ways and a powerful spinning attack can be charged up by holding the action button. But, most importantly, our hero can use a hodgepodge of items and secondary weapons such as the almighty Boomerang to stun enemies and collect items, the Bombs to reveal secret passageways, the catching net to capture bees and fairies and store them in glass bottles for later use, the Power Glove to move large rocks and so forth. Exploration in the game is divided into two major phases. In the first one, Link freely travels the world, talk to villagers and buys new equipment. He then spends the rest of his time in the game's different dungeons and defeat countless guardians hidden within their deepest depths.