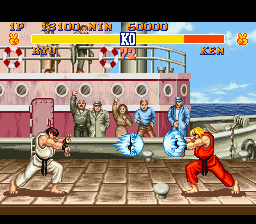 Super Famicom version of the hit arcade game that features all the characters. Select between any of the eight unique fighters, Ryu, E. Honda, Blanka, Guile, Ken, Chun-Li, Zangief, and Dhalsim, each with their unique fighting style and special attacks, such as Ken's Dragon Punch, Dhalsim's Yoga Flame, Zangief's Spinning Pile Driver and Guile's Sonic Boom. Play against the computer on your way to the four Grand Masters or against another player in the dedicated V.S. Battle mode.

Street Fighter II for Super Famicom was released on June 10, 1992 in Japan. This version of the game was Capcom's best-selling consumer game of all time for more than 20 years with 6,3 millions sold.

The opening sequence from the arcade version was removed.

Some of the voice samples when characters perform certain techniques or special moves were removed.

The 'Hurry Up' tracks of each stage were removed and instead the music speeds up when a character is close to being knocked down.

Some techniques were deleted, such as Guile's Knee Bazooka, and Chun-Li's standing Medium Punch.

There is animation missing, especially the animation for characters walking away from an opponent.

The palm tree in the third boss stage was removed.

The announcer doesn't cite the names of the countries the characters fight in or the numbers on the continue countdown.

Two of the elephants in Dhalsim's stage were taken out.

The blood splatter behind the VS text was removed and it was completely changed to gold 'VS' letters.

Characters now have two victory messages instead of one, and some of them were changed or altered.

Visuals and text in the endings are slightly different from the arcade version.

To compensate for the reduced size of the characters and make it less noticeable to players, the screen is letter boxed.

Street Fighter II makes an appearance in 1993's City Hunter featuring Jackie Chan in which he ends up fighting a blonde thug who resembles Ken from the game, all while transforming into Guile, E. Honde (reason for the slight name change from Honda to Honde was that Jackie was a spokesperson for Mitsubishi), Dhalsim, and even Chun Li. The music and sound effects used during the fight scenes are from this version of the game.

When the CAPCOM logo is displayed, press Down, Up, L, R, Y, B on controller 1. You will hear a selection sound. Now both players can control the same character in a match, like in the Champion Edition, which wasn't possible in the arcades. The second character uses the same alternate palette from Street Fighter II' Champion Edition. The bosses remain unplayable, but change to these colors as well.