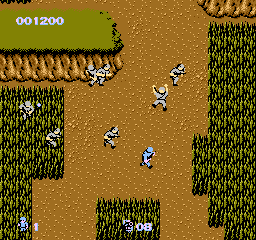 Senjou no Ookami is a vertical scrolling run-n-gun by Capcom and conversion of the arcade game of the same name originally released in 1985. The premise of the game is profoundly simple - the player takes control of a lone commando soldier (called Super Joe) who is out to rescue hostages kept captive by a small army (although the game takes place in 19XX, outfits worn by the enemy and the comic book instruction manual both allude to Nazi Germany during World War II). Joe's mission starts off behind enemy lines, after a chopper drops him off in the middle of an hostile jungle. Armed with only a standard sub-machine gun and a very limited supply of grenades, he has to take on legions of hostile soldiers while avoiding enemy fire, occasionally using parts of the scenery (such as trees, bushes or small buildings) to take cover. His weaponry sounds relatively helpless considering the vast army of enemy soldiers standing between him and his goal, and although he can fire his machine gun in eight directions, he can only throw hand grenades in an arc towards the top of the screen. But Joe has plenty of special items on hand to help him - some are free for the taking and simply lay on the ground whereas others are earned by rescuing prisoners. The special items range from extra grenades (symbolized by flashing boxes), super grenades (kill all enemies on the screen when used), medals (extra life), remote radio (kills all enemies), bullet proof vests and so forth. Additionally, more than just being the most powerful weapon in the game, hand grenades can also be used to reveal secret items or hidden ladders leading to secret underground shelters. Most of them contain additional hostages to rescue, bonus items or enemies, but some are rigged with vicious and deadly traps (such as the lethal gas chambers). Each level ends with a fight against a commanding officer and his team of highly trained soldiers. Senjou no Ookami consists of four stages which loop four times (it basically spans across sixteen levels with increased difficulty) and features a two-player alternating mode.