Action-platform video game similar to that of its predecessors. The player, as Rockman, must complete various stages that contain side-scrolling action and platforming elements. The player can run, jump, slide, shoot, swim, charge the Mega Buster, and change weapons. Enemies can be destroyed to reveal items used to refill Rockman's health and weapon power.

Like Rockman 7, the player completes an introductory stage and is presented with four Robot Master stages (Tengu Man, Frost Man, Grenade Man, and Clown Man) to tackle in any order. At the end of each stage is a boss battle with a Robot Master; defeating the Robot Master earns the player its Master Weapon.

Most Robot Masters are weak to either the Mega Buster or one or more Master Weapon, allowing for some strategy in the order the stages are completed. An additional four Robot Masters (Aqua Man, Sword Man, Search Man, and Astro Man) become available once the first four are defeated and an intermission stage is completed.

An addition to gameplay in Rockman 8 is the ability to display and use multiple weapons onscreen simultaneously. This change introduces a unique way of using weapons strategically. 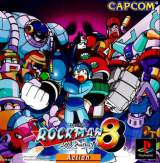