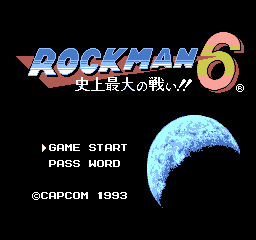 Sixth installment in the original Rockman series. The story opens during a competitive robot fighting tournament with entrants from all around the globe. A villainous figure known as Mr. X announces he has reprogrammed the eight powerful contestants with intent to use them for taking over the world. The game's robotic protagonist Mega Man, who was sent to oversee the tournament, springs into action to foil X's plot. A standard action-platformer, Rockman 6 plays nearly identically to its five predecessors with a few added features such as stages with alternate pathways and new Rush adaptors.