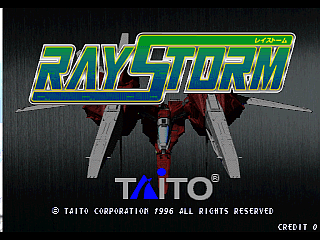 3-D follow up to Rayforce featuring a lock-on laser system.

A sequel of RayForce that does not follow the main plot "Con-Human" storyline, to this time the plot consists of eight stages taking place between August 4 and August 7, 2219 AD; the first three stages take place on Earth, the last three at the fictional planet Secilia, and two between them in the orbits of Earth and Secilia, respectively. Whereas RayForce players must head toward Earth to destroy it, RayStorm players start at and move away from the planet. The plot of the game is exposed minimally during play, with only dates and place names given at the start of each of its first seven stages. An "Extra Mode" included with home versions of the game displays maps before the first seven stages and a closing crawl after completing the game, which further illustrate the plot; the map for the fifth stage, for example, shows that a "gravity catapult" at the Moon is used to travel from Earth orbit to Secilia orbit.

In a future where space travel has existed since 2119. Humans explored space, and within 100 years Earth established a twenty-colony Star Federation extending to Orion, with each colony kept under martial law. The colonies then mutinied against the Federation: they took control of the major colony Secilia, formed the Secilia Federation and defeated Earth's forces after many battles. After Earth's surrender, all of its inhabitants had been transferred to the colonies. The Secilia Federation suppressed colonial opposition and sent out a force to destroy the planet completely. However, by then the R-Gray, a aircraft made with parts salvaged from 13 different Secilia ships, is completed and deployed to carry out OPERATION RAYSTORM, a desperate attempt to defend Earth from the Federation.