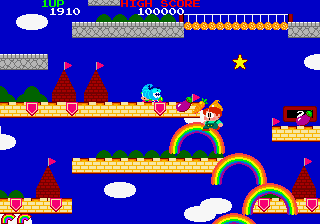 In this sequel to the legendary Bubble Bobble - released a year earlier - one or two players (who, unlike 'Bubble Bobble', no longer play simultaneously) take on the role of Bub and Bob, who have now been returned to their original human form after their success in Bubble Bobble. The returning heroes have been asked to rescue the Rainbow Islands from the clutches of the various enemies who have overrun the islands in their absence.

Bob and Bob are each armed with the ability to create solid rainbows. This ingenious game-play device acts as both a weapon (to either kill an enemy instantly, or trap it then collapse the rainbow onto it, the latter essential for collecting bonus gems - as detailed in 'Tips and Tricks') and as a temporary platform that allows the players to reach previously inaccessible parts of the level, as they race to reach the top of the island before the game's tight time limit expires.

A number of power-ups are available to the players; these include multiple rainbows (up to a maximum of three), faster generating rainbows, speed-up shoes and temporary invulnerability. Rainbow Islands is famous for its multitude of hidden secrets, see 'Tips and Tricks' for details.

Rainbow Islands consists of seven levels, each consisting of four rounds. Holding down the jump button will allow the player to jump onto rainbows without crushing them.