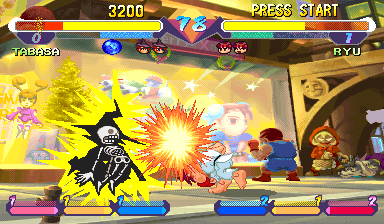 A superb, abstract and humorous fighting game featuring miniaturized renditions from several Capcom fighting games; including the legendary "Street Fighter" series, as well as "Darkstalkers" and the little-known "Red Earth".

During a bout, players will be able to release coloured gems from successful attacks against their opponent, as well as from wooden chests that regularly appear. Collecting these gems will 'power-up' the player's character, giving them more powerful attacks. There are two bars and three sub-bars in the interface. The two main bars are the life bar and the super bar; the first indicates the player's health and the second their ability to throw super combos. The Super Bar itself can be filled up to nine levels, allowing players to execute more super combos. Each super combo has a level assigned to it, and it uses Super Bars depending on it.

The 3 sub-bars show the level of 3 of each player's special moves. Each character has at least three special moves, as shown in the sub-bars, and each of these corresponds to a color. Some characters have one or two additional Special Moves that aren't affected by sub-bars. Each time a player shoots their opponent, gems pop out of him or her, and the attacker can take them to power up their own special moves according to the colors.

There are 4 buttons : PUNCH, KICK, SPECIAL, and TAUNT. The Special button is a chargeable move that cannot be blocked and upon impact drops gems in the opponent's possession. More gems will be dropped depending on how much the player charges the attack. Holding Down, Forward or no direction at all when using the Special button will cause a specific gem color to drop from the enemy. Holding Back along with the Special button allows for a defense that is specific against the unblockable Special attacks. Other kinds of attacks do no damage when blocked, and unlike most 2-D fighting games, this includes special and super moves.

Pocket Fighter also features Flash Combos in which a player can execute a combo by pressing the KICK or PUNCH button after they have hit their opponent using the PUNCH button for a total of 4 hits. Flash Combos will usually cause a player's fighter (except Ryu) to change into various costumes during the sequence, and perform a powerful attack in the end. This final hit is usually the hardest in the sequence to connect with. These costumes range from uniforms (such as traffic cops or schoolgirls), to swimsuits, and even cameos of other Capcom characters. For example, Chun-Li may turn into Jill Valentine from the Resident Evil series, while Felicia may turn into Mega Man or other Darkstalkers characters not playable in the game.

The commands are also very easy compared to the Street Fighter series, thanks to SPECIAL button. By doing a motion (for example : qcf or hcf) and pressing the Special Button the fighter will launch his or her super combo.

In addition to the usual punches, kicks and fireballs, each character has a couple of very abstract yet powerful 'special' attacks; which can range from the player producing a huge mallet (Ken), to standing on a podium and motioning a bicycle race through the opposing fighter (Chun Li). 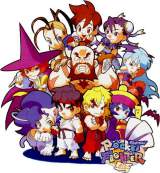