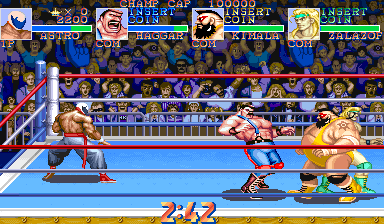 A 1-on-1 fighting game in which players choose from 10 different wrestlers and take to the ring to try and defeat their larger-than-life opponents. Each wrestler has an assortment of moves, including his own special 'super slam'. The object of the game is to win and defend the championship by pinning or putting a submission hold on your opponent.

There are 2 different game modes to select and play : Single Match or Tag Team 'Battle Royal'. In Single Match, players choose to be one of eight wrestlers including 'Mike Hagger', 'Alexander The Grater', 'El Stingray', 'King Rasta Mon', 'Titanic Tim', 'Gunloc', 'Biff Bolshevik' and 'The Great Oni' ('Jumbo Jack' and 'The Scorpion' cannot be selected in this game).

Once a wrestler has been selected, players will compete in a world-wide tournament against the other 9 wrestlers (including 'Jumbo Jack' and 'The Scorpion') in respective matches. In each match, players must defeat each of their respective opponents by a pinfall, count-out or submission in order to proceed to each of the following matches. Once all opponents are defeated, the winner will be crowned champion and players will have to face all opponents again to defend their title.

In Tag Team 'Battle Royal', players can choose to play as any 2 of the 10 wrestlers for their tag team, including 'Jumbo Jack' and 'The Scorpion'. Here, the player and his or her partner have to eliminate both of the 2 wrestlers on the opposing tag team, in order to win the match and proceed to the next. During these matches, if the player is eliminated before his or her partner is, the match will be declared no contest and it will be a draw.

During each bout in this game, metal buckets and/or glass bottles will sometimes be thrown into the ring which can be picked by the players' wrestler(s) and used as weapons against their opponents.