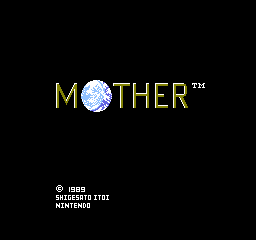 Mother is a single-player, role-playing video game set in a slightly offbeat, late 20th-century United States. The game deliberately avoids traits of its Japanese role-playing game contemporaries: it is not set within the fantasy genre and only enters science fiction for its final sequence. The player fights in warehouses and laboratories instead of in standard dungeons. Instead of swords, assault weapons, and magic, the player uses baseball bats, toy guns, and psychic abilities. The game's protagonist, Ninten, is about 12 years old.

Like the Dragon Quest series, Mother uses a random encounter combat system. The player explores the overworld from a top-down perspective and occasionally enters a first-person perspective battle sequence where the player chooses attack options from a series of menus. On their turn, the player selects between options to fight, guard, check enemy attributes, run away, use items, or use offensive, defensive, or healing psychic powers. The player can also set the battle on autopilot with the auto option. Critical hits register with the series' signature SMAAAASH text and sound.

The player can press a button to have Ninten check or talk with nearby people, animals, and objects. There is a game save option through using a phone to call Ninten's father, an option to store items with Ninten's sister at home, and an automated teller machine for banking money (ATM). The members of Ninten's party are all visible on the overworld screen at once, and are analogous to EarthBound's party members in style and function. Mother's world map does not keep locations separate, and instead connects all areas (akin to the Pokémon game series). The game's story begins as Ninten discovers a music box and receives the journal of his great-grandfather, who studied psychic powers nearly a century earlier. Ninten is attacked by household items, and ventures outside to find a crazy world with hostile everyday objects and other odd events.