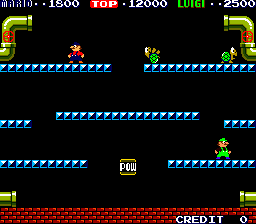 Mario Bros. is a superb, single-screen platform game in which the legendary "Mario Bros.", Mario and Luigi, must try to rid each level of a number of pests that have infested the waterworks : Shellcreepers (turtles), Sidesteppers (crabs that need to be hit twice) and Fighterflies (flies that can only be attacked when they touch a platform).

Players can jump upwards to hit the platform above them, which will 'flip' any enemies on the above platform onto their backs. The prone enemies can then be kicked into the water to remove them. A 'POW' button also appears on a number of screen; this can be 'butted' by a player, causing all on-screen enemies to flip onto their backs; as well as destroying any enemy fireballs that may be around. Each POW can only be used a maximum of three times.

As well as the game's enemies, players are also hampered by the huge amount of inertia that comes into play when controlling Mario or Luigi. This is due to the low degree of traction that exists between the Mario brothers and the platforms. On later phases, ice appears on the platforms reducing the amount of traction even further. As the game progresses, water droplets hang below the platforms and freeze into deadly icicles, which will eventually break off and fall.