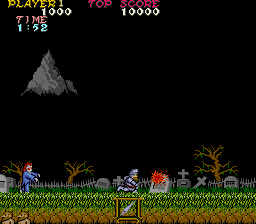 The player takes on the role of Sir Arthur the knight, who sees his sweetheart, Princess Guinevere, kidnapped by the Goblin King.

Arthur must run and jump through six horizontal and 8-way scrolling levels in his bid to rescue the kidnapped princess. Arthur is initially armed with throwable lances, but a variety of other throwing weapons, such as axes, flaming torches, swords etc. are dropped by defeated enemies and can be picked up and used to fend off the zombies, bats, demons and other assorted satanic minions that Sir Arthur has to face.

Each of the six end-of-level gates is guarded by one of Satan's generals; huge, end-of-level guardians who must be defeated before the player can finally reach the Goblin King and rescue the princess. 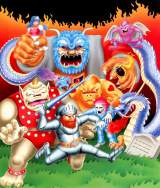