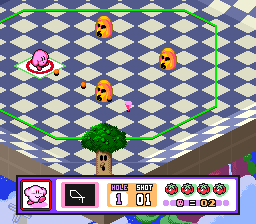 Kirby Bowl is an isometric action/mini golf game developed by HAL Laboratory and published by Nintendo. The ever cute and popular pink Kirby returns as the main protagonist in this unusual spin off. The evil King Dedede has stolen all the stars from the sky, and Kirby rushes off to the villain's floating castle to save Dream Land once again. The player is charged with the task of helping the titular character completing all kind of levels designed like cute miniature golf courses. But here, unlike other tiles in the franchise, Kirby acts as a golf ball and the player has to push the little round character and send him into exit holes in order to progress through the game. However, these exit holes are nowhere to be seen at the beginning of each level. In practice, Kirby has to hit all the enemies found on the course first, and the last enemy then magically turns into the exit that leads to the next stage. Kirby Bowl, despite its non-traditional nature for a Kirby game, still holds onto what made the series so popular in the first place. Our puffball can obtain different abilities from his enemies, and can turn into an U.F.O, grow sharp spikes or float with the help of an umbrella. He can also do a large variety of moves (jump over obstacles, spin or bounce) and the player often has to strategically balance strength and spin to achieve the perfect shot. Additionally, before making a shot, the player can even plot his next move and visualize the ideal trajectory! Finally, Kirby's life is symbolized by small red tomatoes - he loses one each time he makes a shot, and wins one each time he hits an enemy or finishes a hole. If he loses all his tomatoes then he loses a life, and once all the lives are gone then the game is over. Kirby Bowl consists of eight courses made out of eight holes each and also includes a two-player versus mode.