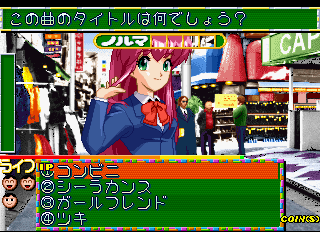 Kirameki Star Road is a music trivia game for one or two players where the player assumes the role of a music talent scout. At the start of the game the player chooses one of three girls to promote as a new music idol. The object of the game is to listen to a piece of popular music and select the correct musician or title for the song before the timer runs out. After getting a set number of questions right, the player will be rated on their performance and will be shown how the girls popularity is advancing within certain demographics.

At each new stage the player gets to pick the genre from which the music selections will be pooled from and also gets to see the selected girl in a new costume. In the first stage the girl is scouted in her school uniform, the second stage involves a swimsuit audition, and later stage costumes are decided by the genre of music selected for that stage.

Each mistake in the trivia or mini games leads to a lost life. The game is over once a player looses all their lives.