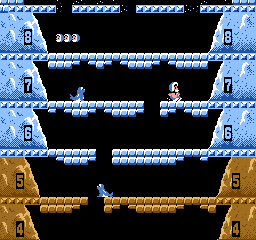 You are an Eskimo who wants to climb mountains. You can jump and break the ice, or splat monsters with a handily provided hammer. Bad weather will hamper your progress through 20 different scenarios. A fun platform game in 2 player mode, but pretty unimpressive in 1 player mode.