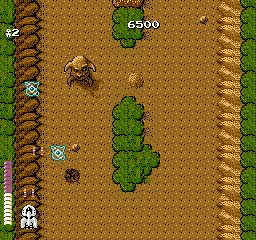 Hector '87 is a shooter by Hudson Soft. In the year 4622, humanity creates time machines capable of travelling back to the Earth's enchant past. However, most of the research ships have been destroyed by an unkown bio-mechanical enemy. The players pilots the new Noah class time-fighter and must fight a wide range of odd ships in the most ominous environments. The game includes six time zones called Histories (ranging from Inca temples to Egyplians giant sarcophaguses) and alternates between vertical and horizontal stages. The Noah is equipped with two kinds of weapons - a main upgradable Vulcan gun and cluster ground bombs. The ship also comes with a shield meter and takes several hits before going down - however, the game doesn't reward the player with any powerups and enemies only drop life/shield pods when destroyed. Hence Hector '87 was part of Hudson Soft's Caravan tournment, the game also features a two and five minutes attack mode.