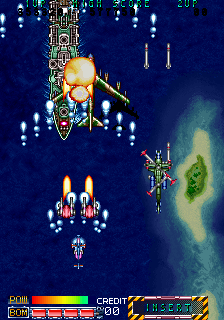 It is August 1999. In the skies over the Middle East, the second Persian Gulf War has begun. The early half of the 90's, the Persian Gulf War breaks out in the Middle East and prolonged fighting rapidly increases the rate of destruction of the world's natural resources. In 1999 this develops into a state of crisis where the effects of the war have resulted in an absolute shortage of reserves. Mistaken policies have resulted in the nation of the Middle East, suffering from shortages since the time of the original Persian Gulf War, taking military action against neighboring nations in an attempt to assure a supply of resources for themselves. Those nations which have managed to escape the fighting once again form a Multinational Force. Using the technology gained from research which had been done for a new type of nuclear reactor, they succeed in developing and producing GRID - a Gyrodrive Reactive Intercept Device. This is the start of Project Storm Hammer.