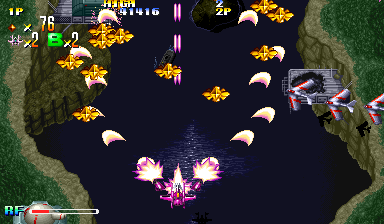 'Medallions' are mystic stones sent from heaven, brought evolution to human technology and lead tremendous progress to the armories. To gain their powers which the 'Stones' hold for the promised victory, many nations fought over the mystic stones and reheated the world of war. Within all the 'Stones' is the 'Medallion of Wisdom', known as the power source of all mystic stones, it had enough energy to terminate humanity. The whole world was in despair. And now, four brave worriers have risen to fly straight into the combat zone! All four had different reasons, but their ultimate goal was the same : to destroy the Medallion of Wisdom! Fight to save the humanity!

Giga Wing is a shoot-em-up set during a fictional war. The player controls one of four different futuristic aircraft and must destroy enemy aircraft, tanks, ships, and buildings using both guns and missiles mounted on the aircraft and a limited supply of bombs which damage or destroy all enemies on-screen when used.

Runs on the "CP System II" hardware.
Green Board [Japan]

Players: Up to 2.
Control: 8-way joystick per player.
Buttons: 2 per player.

Giga Wing was released in February 1999 in Japan. It was known as the 30th video game released for the CPS-II hardware.

It was the first arcade video game to show scores in the trillions!

The game forbids the initials 'SEX' on the high score table. If you try, it gets changed to 'CAP'.