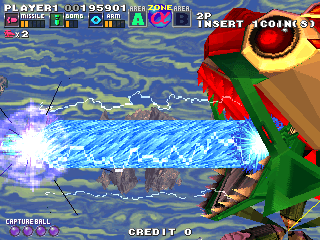 G-Darius literally added a new dimension to the highly regarded 'Darius' series, with the introduction of fully 3D rendered backgrounds and enemies. Namco had already done the same with their Xevious series for "Xevious 3D/G", released the year earlier, but G-Darius is generally regarded as the most accomplished of the two titles.

G-Darius' game-play was also enhanced, with the 'Capture Ball' system; this allowed the player to capture almost any enemy craft and use it against the game's other enemies. Captured enemies can either be detonated like a ''bomb'', damaging all enemies nearby; or used to fire a special 'Alpha Beam', which cuts through everything but gold-colored objects and enemy bosses. Each boss is capable of firing its own version of this beam at the player; when both beams meet, they will interrupt each other's path. Depending on how rapidly the player presses the Fire button, one beam will grow and eventually overpower the others. The Capture ball was actually introduced in "Darius Gaiden" but was only used to a minimal extent.