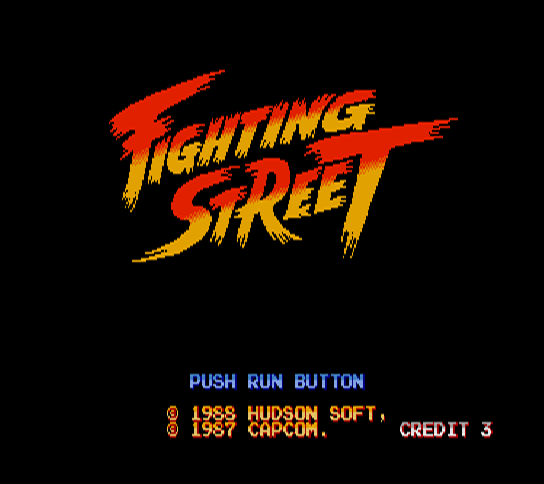 Fighting Street was released on December 4, 1988 in Japan.

The arcade version of this game is known as "Street Fighter".

Hudson's 1988 PC Engine CD-ROM² System conversion, one of two launch titles for the add-on, features include a remixed score, the ability to earn extra continues by clearing Bonus Stages, and high score saving.

* Get a high score. For your initials enter .SD (look out for the '.' dot). When the title screen appears, hold Left, Button I, and Button II, then press Select. You get 7 credits and can choose to start at any match you want, including selecting the very ending of the game. Special Moves are also much easier to execute, press Right + Select for Hadoken, Down/Right + Select for Shoryuken, and Left + Select for Tatsumaki Senpukyaku.

* Fighting Street features a bonus ending sequence were Ryu (or Ken) are seen leaving on a plane that wasn't seen in the arcade original (Street Fighter). If you clear the game four times in a row, you will see Ryu (or Ken) arrive at their destination instead of leaving for it before the staff roll sequence (you can also see this ending by viewing the ending four times in a row from the Stage Select menu).