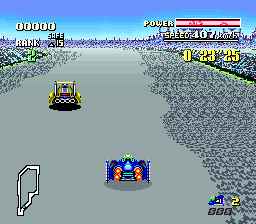 F-Zero is a fast and futuristic hover-craft racing game by Nintendo and was one of the launch title for the American Super Nintendo system. The game takes place in the 26th century, humans and aliens now share the universe and seek for new kind of entertainments. High-speed races called F-Zero were created for that matter and became increasingly popular. Four pilots and their respective hover-craft are available from the start, each one of them balancing out Power, Speed and acceleration .The game counts not less than fifteen tracks all spreaded around nine areas such as Myûto Shiti (Mute City), Biggu Burû (Big Blue), Sando Ôshan (Sand Ocean), Desu Uindo (Death Wind), Sairensu (Silence), Howato Rando (White Land) and Pôto Taun (Port Town), Tracks are also group into three leagues (Knight, Queen and King) with various difficulty levels. More than racing their vehicles in an effort to cross the finish line, players also have to take care of land mines scattered around the tracks, holes or powerful magnets that dramatically affect their driving. Thankfully, turbo-boosts are available and can be used to avoid some of those hazards. A power shield bar is constantly displayed on the screen and will decrease as the vehicle gets hit or goes out of the track. The only way to refill it is to drive over special pit-stop areas on the track which will slowly regenerate the precious magnetic field. The game counts many surprises, such at the strong wind blowing on Death Wind, split ways or the super-start trick to get a special boost at the start of every race. 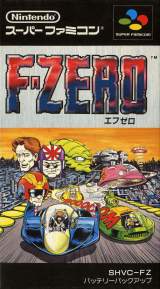