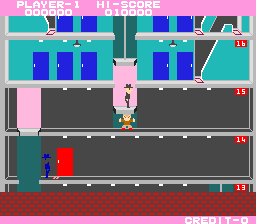 Agent 17 (code name 'Otto') is to secure the top secret documents from the security building. The enemy spies are in pursuit and their orders are to stop him at any cost. Having made it to the top of a 30 story building, Agent 17 has to make his way down to the basement to get to the getaway car and save the documents. Enemy spies are everywhere and the documents are hidden behind the red doors (bonus points awarded). He has to open the door and keep moving. If either of them shoots the lights out there will be a temporary blackout. If Otto finds himself on top of the elevator the player will not be able to control the elevator. If he gets caught in the elevator he is a sitting duck and cannot duck the bullets. By using the escalator he can reach the basement quicker. Otto can defeat his enemy by jump kicking or firing at them. Help Otto to grab all the documents and escape the spies.