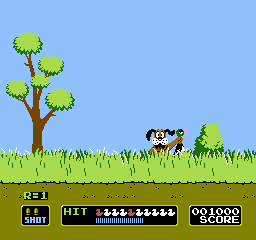 It was a hugely popular video game title and was a launch title. In Duck Hunt, players had a special gun apparatus, the Nintendo Zapper Gun that they plugged into the console, and attempted to shoot down ducks or clay pigeons in mid-flight. Like many early video games, Duck Hunt is endless.

The player is also accompanied by a nameless dog which laughs whenever a duck is missed. The dog has passed into video gaming folklore, alongside 'All your base are belong to us' (from "Zero Wing") and the various vocal messages from "Gauntlet". Additionally, one of the more popular urban legends within the video game community claims that some players have found a way to shoot the dog. This is actually impossible for several game-play reasons and limitations, although it is possible to shoot the dog in the bonus round of the arcade version of the game, "Vs. Duck Hunt" (possibly the origin of the urban legend).

* Freeze targets : Press Start to pause game play, then resume. The targets will remain paused for a brief amount of time, allowing an easy shot.

* Duck control : Use a standard controller in port one to control the ducks. Note: This may be done when one or two ducks appear on screen.