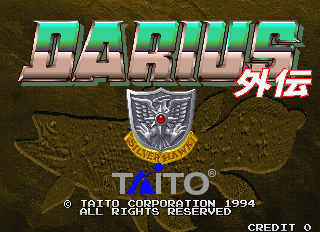 In this game, the third in the Darius series, the player flies an ornate fighter craft called the Silver Hawk. The craft is equipped with two weapons: Missile (forward-firing standard gun) and Bomb (drops from the bottom of the ship). The Silver Hawk is also equipped with the 'Arm' (armor), a green energy shield that can absorb enemy attacks without harm to the ship. Some enemies leave panels behind that can be collected to power-up your shots, missiles or shield.

The graphics and sound are superior to those of the previous Darius games, and the game employs a lot of impressive visual effects; for example, the Silver Hawk warps into a stage dramatically in the fourth-tier stages, and begins to burn on re-entry at the start of the sixth-tier stages.

The bosses are huge and far more complex than those of the previous games, each employing several attack patterns and explode with powerful warping and twisting effects upon their defeat.