A horizontally scrolling shoot-em-up that was unique at the time for featuring a game screen that was three times wider than the conventional size, with the arcade cabinet utilizing three CRT screens to accommodate it.

In the game, the player flies an ornate fighter craft called a Silver Hawk. The craft is equipped with two attack weapons : Missile (forward-firing standard gun) and Bomb (drops from the bottom of the ship). The Silver Hawk is also equipped with the 'Arm' (armor); a green energy shield that can absorb enemy attacks without harm to the ship.

During the course of the levels the player must navigate the terrain and battle a variety of fighter craft, ground vehicles, turrets, and other obstacles. At the end of every level, players are greeted with the obligatory end-of-level boss. The bosses in Darius are often in the form of mechanical aquatic animals, such as fish or squid. If the player defeats the boss, the tunnel splits into two and the player must decide whether to take the upper or lower tunnel, both of which lead to a different stage. This allows many different paths to be taken through the game.

Power-ups can be obtained by shooting enemies of a certain color, with the power-ups appearing in the form of colored bubbles. Each color corresponds to one of the ship's three weapons :
* Red - Missile
* Green - Bomb
* Blue - Arm

If the player powers up a weapon more than seven times, the weapon changes to a new, more powerful version. This then becomes the player's default weapon, and can be powered up further. There are also two other colors of power-up bubble, white and orange; which can be obtained by shooting at certain sections of the terrain; unfortunately, there are no visual clues as to where these may be on any given level. These hidden power-ups offer the following :
* White - Gives a score bonus.
* Orange - Smart bomb that kills all on-screen enemies. 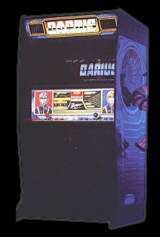 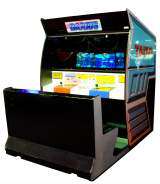 Even if titlescreen says 1986, Darius was released in February 1987 in Japan.

Darius was unique in the fledgling genre for having a game screen three times longer than the usual size, and thus requiring three screens to be arranged side-by-side in order to play.

The player flies a small spacecraft called a Silver Hawk, which is also distinctive in being highly detailed in design - indeed, Taito devised mock blueprints for it. The Silver Hawks are a trademark of the series.

Another trademark of the series is the unique branching level structure. The levels are arranged in a large binary tree, and at the end of each level, the player must choose one of two paths to follow. This means that there are many different paths that can be taken through the game.

The first stage music is a remix of the "Metal Soldier Isaac II" intro music (1985).

* Power levels : There are eight power levels (0-7) within each armament category. Your weapons, shields, and bombs improve as you go from 0-7 :
Weapons : The shots move faster and therefore recharge more quickly.
Bullets increase in number and waves increase in height, thus destroying more enemies at once. Waves, once fired, will go through anything until leaving the screen to the right.
Shields : They just recharge, but the better classes of shields absorb more hits. Gold shields will also protect your ship from collisions with objects as well as shots, but on certain screens that have lots of little squeezeways, gold shields can actually kill you by ricocheting your ship back and forth until you die.
Bombs : They get 'smarter' in seeking out targets.

* How to complete the game : Completing the game is easiest with triple bullets.
Explore the different paths this way, and when you're ready for a challenge, try to get wave.
Lasers are not weapons so much as a handicap you have to endure while building to wave.