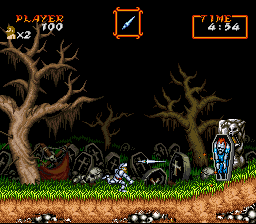 Chou Makaimura is a platform game by Capcom and is a Super Famicom exclusive episode of the popular Makaimura series. Fearless King Arthur is back and proves why he's the best at doing what he does! The beautiful princess Prin Prin has once again been captured by grim demons. Arthur's journey takes him deep into the demon realm where bloodthirsty monsters, ghastly ghouls and their lord, Emperor Samael, are all waiting to rip him to shreds. Arthur unsurprisingly starts his adventures in a dark and haunted cemetery but stages rapidly take him to magnificent and unique locations - from a dismounted sea throwing huge waves at him to evil ghost ships infested with ephemeral spirits. New weapons can be collected by cracking chests open and each one of them upgrades Arthur in different ways. The game features a lengthy list of weapons such as the Lance, daggers, the Crossbow, the Axe and so forth... Arthur's only defense is his armor and it only offers a thin protection. However, new ones can be collected such as the copper armor (green) or the gold armor allowing him to charge up and unleash devastating magic attacks. Another interesting feature introduced here by Capcom is the double jump - Yes, King Arthur can jump twice in mid-air. This may sounds weird and unusual at first but it quickly becomes a unique move that lies at the core of the gameplay.