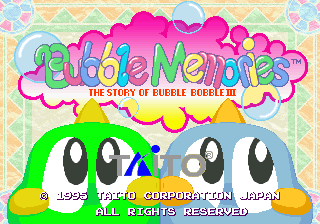 Even if title screen says 1995, Bubble Memories was released in February 1996.

The entire cast of basic enemies from the original "Bubble Bobble" (including 'Skel', aka "Baron Von Blubba", so continue to watch out for him if you take too much time in a room; 'Rascal' also returns if you take too much time in a secret room) returns once again (however, the original game's end boss, 'Super Drunk' does not appear in this game), along with many of the characters first introduced in "Bubble Bobble II". There is also a new version of 'Monsta' with a teal body and yellow eyes, who moves horizontally and vertically, as opposed to the regular 'Monsta' who moves diagonally.

Chack'n from "Chack'n Pop" joins Zen-Chan and company in the pursuit of Bub and Bob. In this game, he dons a blue helmet. There is also a large version of him requiring a giant bubble to trap and kill. There are also giant versions of Zen-Chan, PulPul, and Puka Puka.

* Super Mode : Press Left, Start, Fire, Jump, Up, Down, Start, Right at the title screen to unlock another set of levels.