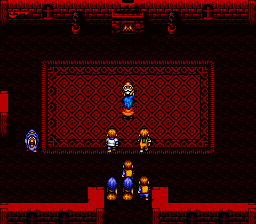 Breath of Fire is a deep role-playing game designed to test the adventuring skills of even the most experienced gamer. Breath of Fire has an automatic battle command fighting system and some of the best spells effects ever seen on a 16-bit system. For example, the Hero can learn to transform into nine different types of dragons, and the Thief can create super-characters by fusing different party members together.

Like any great RPG, Breath of Fire has an intriguing storyline. An evil sorceress brings two competing dragon clans under her diabolical spell. Capable of transforming themselves into savage monsters with awesome powers of destruction, the clan members are bent on destroying the world. A young adventurer and seven warriors are awakened from an eternal slumber to wage war against the shape-changing enemies and save the world.