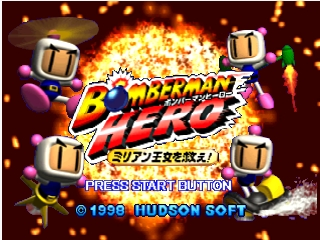 Developer Hudson Soft drops a 96-megabit payload on Bomberman's legions of fans with this - we gotta say it - explosive new action title. It what has to be a record for a console game, Bomberman Hero comes crammed with a whopping 71 levels. There literally are five worlds, too, since Bomberman's journey takes him to that many planets -- plus a bonus planet, if he's particularly potent with the payloads!

A peaceable bloke at heart, Bomberman is caught in the crossfire between two warring worlds. While exploring the wreckage of a mysterious craft that has crashed on Planet Bomber, the B-man comes helmet-to-helmet with Nitros, a hard-bitten warrior from the distant Garaden Empire. Nitros will stop at nothing in his quest to recover a computer disk, last reported in the possession of Princess Millian's robotic sidekick, Pibot. It's up to Bomberman to prevent Nitros from turning Planet Bomber into a smoldering ruin!

Bomberman Hero has plenty of puzzle and exploration elements. The B-man doesn't carry an infinite payload, so you'll have to conserve your explosive resources while searching for 21 different items. Along with the familiar 1-Ups and life-meter extenders, unusual treasures include force field deactivators, the distance-enhancing Power Glove and even slugicidal Salt Bombs!

Bomberman's aquatic adventures require him to take the helm of the Bomber Marine, which comes loaded with torpedoes. He also takes to the air in the Bomber Jet and Bomber Copter and shreds the slopes in the snowboardesque Bomber Slider. Bomberman also gets help from the affable Pibot and Louie, a green rabbit who likes to thump troublemakers.

After fighting his way to a bitter battle with Garaden minions in the wilderness of Planet Bomber's Peace Mountains, Bomberman must lay assault to the forbidding fortresses of Planet Primus. On Planet Kanatia, he must navigate lava tubes and baffling labyrinths en route to the fearsome Dark Maze.

In the lush jungles and ice-capped peaks of Planet Mazone, Bomberman gets some help from Louie. Then it's on to the heavily armored home planet of the Garaden Empire. There's a bonus planet, too, if you can collect all the well-hidden Special Bombs and earn a Clear Points rating of five on every stage the game.