Battle Lode Runner is a platform game by Hudson Soft and based on the timeless classic Lode Runner originally released by Brøderbund in 1983. Like its big brother franchise, the game is set in a strange world where players (dressed as space-travelers, or more precisely, time-travelers) must collect all the gold they can carry, and reach the exit in order to complete each level. Each stage is laid out with blocks, vertical ladders, horizontal ropes and stacks of gold, and the looting would be a walk in the park if only foes wouldn't be freely wandering around and constantly tracking down the players. But the lode runners don't come to a fight unarmed and they are equipped with a ray-gun. However, they don't directly use this weapon to zap their enemies to oblivion, but to dig holes into the ground. Beside, there is an important twist to that technique - players can only remove adjacent blocks (left or right), and not the ones directly beneath them. This technique is at the core of the gameplay, and can be used to trap enemies (holes do automatically fill in after a while, killing anything trapped in them), or to access unreachable stacks of gold. Battle Lode Runner consists of ten groups of tens levels each, all with their own theme and time periods (such as Jurassic Period, 19 AC China, 20 AC America, 17 AC Edo Japan, 18 AC France, 5 BC Egypt and so forth...). Although the first fifty levels are directly available from the start, the last fifty can only be unlocked by completing the game once. In addition to the puzzle mode aforementioned, Battle Lode Runner also includes a battle mode where up to five players can challenge each other in frantic death matches (actually, there are three different options - Survival, Escape and Tag Match). This mode differs from the main game in many ways - the horizontal playfield loops around and power ups (such as Speed, Curse, Multiple Digs and so forth) can be collected to spice up the action. Finally, in the Lode Runner tradition, the game also includes a level editor. 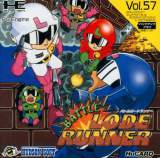