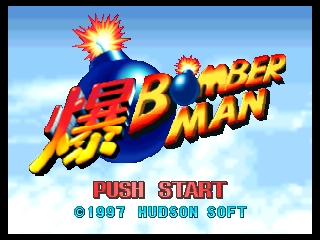 The inhabitants of Bomber World have a unique philosophy of life: if something gets in the way, blow it up. Now you, too, can join in the fun with Hudson Soft's Baku Bomberman.

To maximize your score, you'll need to finish each of the 20 levels as quickly as possible. Deadlines are tighter on the Hard difficulty setting. Despite the prevalence of incendiary devices, Baku Bomberman's overhead perspective, cartoon-like graphics and bright palette gives the game the cheerful feel of Super Mario RPG.

It's Baku Bomberman's multiplayer mode, though, that really blows the socks off the pyrotechnicians at Power Source. In Single Battle mode, dashing about the baffling arenas and blowing each other to smithereens proves to be, well, a blast. Team Battle mode is a highly explosive version of capture-the-flag. Your goal here is to destroy the enemy team's gems while protecting your own.

You can choose the number and duration of battles. You can also choose from three levels of artificial intelligence for CPU-controlled bombers. When the Ghost option is selected, your little guy will return as a wispy double of his old self after he's gone boom. Ghosts can control a normal Bomberman, but they cannot deploy bombs.