Ares no Tsubasa - The Legendary Soldiers 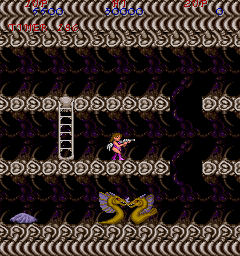 Ares no Tsubasa - The Legendary Soldiers was released in November 1986 in Japan. It is known in the USA as "Legendary Wings".

The title translates from Japanese as 'Wings of Ares'. Ares is the Greek god of war.

The main character appears as a striker character (Michelle Heart) in "Marvel vs. Capcom - Clash of Super Heroes".

* On each level, a trio of statues arranged in a triangular pattern will appear about three-quarters of the way through. Bomb them until one of them reveals a passageway (you'll have to bomb them all; it's not the same one every time), and fly into it. You'll now be in a cave, free to fly along and collect treasure chests worth 200 points apiece. When you're in the cave, though, don't shoot - if you fire and hit a treasure chest it's destroyed, and some of the cavern walls release enemies when shot.

* A mouth's stage bug : At the final of each stage inside of the statue's mouth, you have to go upstairs to face a stage boss. You can avoid to confront him directly. To achieve this, go upstairs and walk slowly approximately to the middle of the platform. The music will change to the boss theme. Go back downstairs and stay on the middle platform. Keep shooting the screen at the opposite direction of the boss. He will be defeated in seconds this way, without any risk for your character.