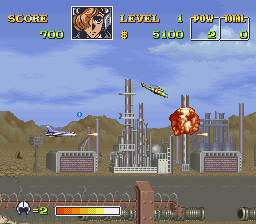 Area 88 is a side scrolling shooter by Capcom, conversion of their own arcade game originally. An evil general and his army are taking over the world and they must be stopped. A group of three highly skilled mercenary pilots who blow things up for cash, Shin Kazama, Mickey Scymon and Greg Gates, accept the mission readily. On board of their aircrafts they're now ready to defeat the greedy dictator and restore peace. One of the distinctive feature of the game is the ability given to the player to purchase new weapons and fighter planes. Right from the start, pilots are offered a F8E Crusader fighter and some cash. Then after each mission, the earned cash can be used to purchase new weapons or a brand new fighter giving the player a sense of customization. But there is a catch and special weapons and cash are lost if the player happens to die during a mission. Each pilot also comes with his own specialty - Shin, the young hero pilot, can level up the standard plane's Vulcan gun faster than his friends, Mickey, the hot-shot, can carry more special weapons and Greg, the veteran, has more health and can recover faster from injuries. The game is vast and offers not less than ten intense stages. It is however one player only.