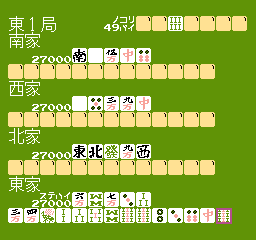 The title of this game translates from Japanese as 'Four-Player Strike Mahjong'.

4-nin Uchi Mahjong was the eighth best selling Famicom game released during 1983 and 1984, selling approximately 1,450,000 copies in its lifetime. It was presented as an improvement over Nintendo's original Mahjong game, since it allowed for up to four human players to compete at one time, which is more like a traditional game of mahjong.