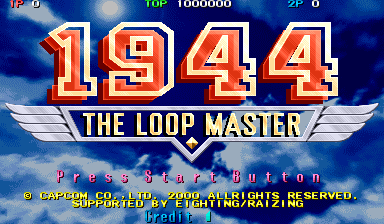 Runs on the "CP System II" hardware.
Green Board [Japan]

* Hold FIRE to charge guns. When it is fully charged release FIRE. The plane will be INVINCIBLE for a short period of time and fire powerful low range projectiles. Then the guns will overheat preventing you from charging them for a short time.

* The mini fighters that appear beside your plane are destroyed after taking two hits. Destroyed side fighters are replaced if you have more in stock. During charge attacking or when there is no bomb, pushing BOMB makes side fighters charge forward for a powerful suicide attack.