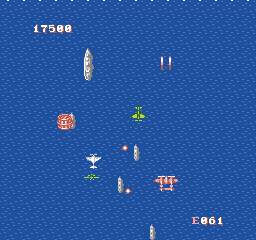 1943 is a vertical shooter by Capcom and conversion of the arcade game of the same name originally released in 1987 (and sequel of 1942). The game takes place during World War II and is set in the Pacific air war theater. The player takes control of a Lockheed P-38 Lightning American war plane and fights his way through twenty four stages over the Midway Atoll, and the main goal of the game is to annihilate the Japanese air fleet and sea forces. The P-38 comes equipped with several forms of defense - a primary Vulcan Gun that can be charged up by holding the fire button, and a special power attack that can be unleashed in a blinding flash of lightning. However, the latter use some of the plane's own power - fuel is at the core of the gameplay and it depletes as the game progresses, or when the player takes damage. Power-ups are usually obtained by taking down formations of red planes, and they range from Pow icons (restores energy), shotgun (upgrades the main weapon to a weak spread gun) and double-cell (refills more energy). However, more weapons (such as a second spread gun, lasers, missiles and so forth) can be unlocked as the game progresses. Unlike its predecessor, 1943 gives the player the ability to customize the P-38 before battle and throughout the game - offensive power, defensive power, energy level, special weapons and special weapons time limit are all attributes that can be modified and improved. Moreover, special power-ups are hidden throughout the game, and although most of them give players extra energy or points, a special flower shaped power-up icon gives players the opportunity to further improve the plane's stats (a rare dragonfly icon also offers twice the number of power-up points). Finally the game features a password system allowing players to save their progress.