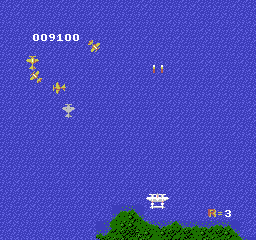 1942 is a vertical shooter and a conversion of the arcade game of the same name originally released in 1984. The game takes place during World War II and depicts the historical battle of the Pacific war between Imperial Japan and the forces of the United States Navy. The player takes control of a P-38 Lightning war plane (called the Super Ace) and fights his way through thirty two levels, taking down Japanese fighter planes and battle ships in order to reach and destroy Tokyo. Power-up upgrades can be collected along the way by destroying formations of red enemy planes - these upgrades come in different forms and range from machine-guns (green) which double the main weapon's strength (from a twin to a quad barrel gun), support wingmen planes (white) which fly to either side of the P-38, smart bombs (white and red) which destroy everything on screen, extra lives (red) and so forth. The P-38 also comes equipped with a limited amount of spectacular diving escape maneuvers (called Retreats) - evasive loops can be performed to avoid enemy bullets and escape critical situations. 1942 also features a alternating two-player mode.