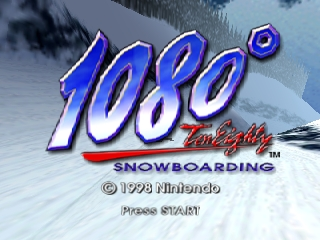 Get Ready to Shred the Slopes!

In the tradition of Nintendo EAD classics like Wave Race 64 and Star Fox 64, 1080° Snowboarding sets a new gold standard in graphics, play control and sound. Whether you're sticking a Stalefish in the half pipe or a 720 Air in a raging blizzard, 1080° delivers snowboarding action so real you'll be checking your nose for frostbite!

Graphically, 1080° delivers the most breathtaking mountain vistas this side of the Himalayas. Richly detailed texture maps of rocks, snow caves, glacial lakes, trees, cabins and more fully immerse you in a wintry wonderland. 1080°'s wealth of effects include falling snow, lens flares, flickering torches and wake powder blowing back at the screen. The frame rate is as smooth as polished ice for all camera angles -- including looking backwards up the mountain!

1080º's high point, though, may be its jaw-dropping play control. The game's simulation of the feel of snowboarding is nothing short of astonishing. Racers wallow through snow banks, lose control on ice sheets and fight to maintain control over 1080º's many moguls, bumps and berms. A Wave Race 64-like stunt system offers more than a dozen grab and spin tricks, plus a points-enhancing combo engine. Slot in a Rumble Pak for a feel that's even more real.

The audio engineers topped off this gorgeous pak with superlative sound effects of boards scraping, swooshing and sliding across the many types of snow and surfaces. 1080°'s Snowboarding's sound track, unlike Wave Race's lounge sound, back ground music, rocks heavily, and fits the extreme image of the game perfectly.

The crackerjack developers crammed each of the six downhill courses with plenty of branching routes, shortcuts, tricky moguls and other opportunities to knock precious split-seconds off your time -- if you're not good enough. Mix in widely varying snow, weather and lighting conditions and you're assured of constant surprises, even after you've stuck scores of Stiffies on the slopes.